Anti-Inflammatory Diet May Cut Down the Risk of Dementia 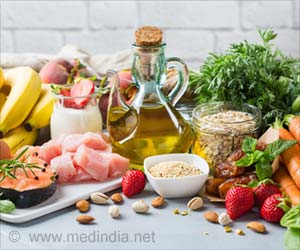 is the most common one.

These loaded healthy plant compounds combat age-related inflammation and thus aid in dipping the risk of neurodegenerative conditions like dementia by a third.

The study team assessed 1059 older adults (65 years of age and above) based on questionnaires for their diet compatibility for anti-inflammatory foods. Following this, the participants were tracked over an average of three years.

Based on the nutrient intake, the questionnaires’ scoring ranged from minus 8.87 for the most anti-inflammatory diet to 7.98 for the least. The higher the scores, the worst was the diet.

It was found that around 62 people (6%) developed dementia among a total of 1,059 study participants.

The group that consumed the most anti-inflammatory diet comprised of ~20 pieces of fruit, 19 servings of vegetables, 4 servings of legumes, and 11 cups of coffee or tea in the average week.

On the contrary, the group with the least anti-inflammatory diet consumed around only 9 pieces of fruit, 10 servings of vegetables, 2 servings of legumes, and 9 cups of coffee or tea during an average week.

Moreover, every one-point increase in the inflammatory score (for diet) was linked to a 21% rise in the dementia risk.

“These findings suggest that people could protect their brains by eating more healthily. There may be some potent nutritional tools in your home to help fight the inflammation that could contribute to brain ageing. Diet is a lifestyle factor you can modify, and it might play a role in combating inflammation, one of the biological pathways contributing to risk for dementia and cognitive impairment later in life,” says Dr. Nikolaos Scarmeas, MD, Ph.D., of National and Kapodistrian University of Athens in Greece, a Fellow of the American Academy of Neurology and senior author of the study.

The study thereby states that distinguishing and quantifying the inflammatory potential of diets may help tailor clear-cut dietary recommendations for better cognitive health.

“This study is lending further weight to the mechanism inflammation — specifically neuro-inflammation — that much of us understand as being one of the main players in causing cognitive decline and Alzheimer’s dementia,” says Dr. Thomas Holland, a physician-scientist at Rush University Medical Center in Chicago, who reviewed the findings.

Further to this, the scientist recommends the consumption of MIND (Mediterranean-DASH Intervention for Neurodegenerative Delay – combination of the Mediterranean and DASH diets) diet for brain health.

Simultaneously, it is equally important to avoid a Western-type diet pattern that includes fried or fast foods, whole-fat dairy, pastries, and red meat.

Impacts of diet on the brain and overall health have long been reported through several pieces of research.

Earlier studies have found that the increased consumption of an inflammatory diet is linked to poorer memory and development of cognitive decline at a younger age. The present study thus shows promising results of anti-inflammatory diets on cognition.

However, as the study was observational and not a clinical trial, it fails to prove if the anti-inflammatory diet prevents cognitive decline and dementia and rather establishes an association.

“As people can change their diets, they might want to think about eating anti-inflammatory foods like fruit and vegetables and avoiding more inflammatory choices like very high-calorie foods. But more research is needed before specific dietary advice can be given, as this was not a clinical trial providing clear proof,” says the study.

ADHD Can Lead to Generalized Anxiety Disorder in Adults

Because of this the first wife had given Anurag a blow...